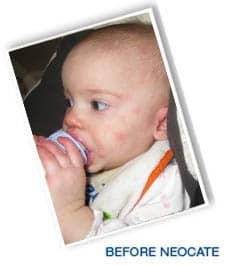 At five weeks old, baby Shannon struggled to keep food down.  She vomited constantly and spit-up during feedings.  At five months old, the vomiting continued and Shannon’s symptoms worsened – rashes and eczema covered her body.

“Our five year old son told me that he didn’t like to sit next to Shannon because she was always getting sick,” says Megan, Shannon’s mother.  “It got to the point where we couldn’t take her to other people’s houses.”

As it turned out, Shannon was suffering from food allergies, celiac disease and eosinophilic esophagitis.

In the long months that followed, Shannon tried five different formulas and two different types of medicines for reflux, but nothing helped her eat or lessened her discomfort.

Then, at seven months old, Shannon was prescribed Neocate.  Within two days her eyes brightened, her skin cleared and she no longer spit-up.

“We were amazed at the transformation,” says Megan.  “Once Neocate was her primary food source, she never spit up again!” 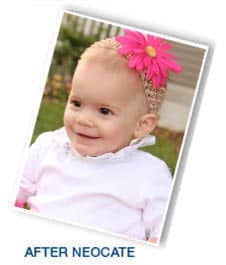 With Neocate, Shannon will have the opportunity to grow to be a happy, healthy girl, able to play with her brothers.

“I am so relieved,” says Megan.  “I know that all of Shannon’s nutritional needs are being met with Neocate.”