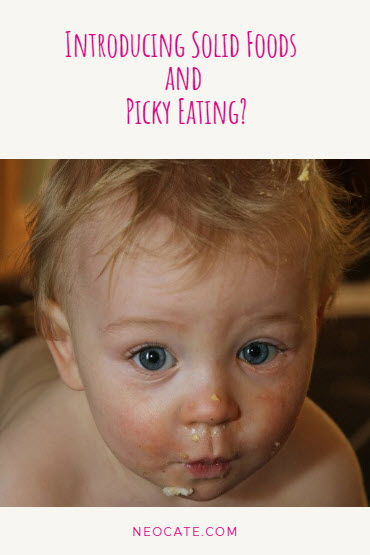 We get questions related to starting solid foods from parents pretty often and have blogged on topics such as how to start and some specific tips for infants with food allergies. Your little one’s healthcare team can answer your questions about starting solids. They’re the best since there isn’t always consensus in the medical community. They also know your little one best!

Today we want to share an interesting study that was published in the Journal of the American Dietetic Association for your consideration.

Solid food and picky eating. A Study and its findings

The title of the article is “Associations of Infant Feeding Practices and Picky Eating Behaviors of Preschool Children.” We can simplify it to “how feeding infants might add to picky eating later on.” The authors looked at how feeding patterns in infancy, when eating patterns start to develop, affect eating behavior later in life. We know that every child will exhibit picky eating at some point; what we don’t know is how picky they will be and how long it will last. We don’t know any parent who wouldn’t do whatever they could to reduce picky eating!

The authors of the study looked at data from 129 mothers of preschool-aged children. The focus was on how early the moms started solid foods. They compared this with how willing the children were later in life to try new foods and how much variety their diets had.

What the Results Mean

While it’s tempting to take the results of this study at face value, waiting until 6 months to start solids won’t prevent picky eating. For starters, the authors admit that picky eating is hard to define, and each parent sees picky eating differently. This study also relied on parents’ memories about feeding their infants, and the small study group may not represent the whole population.

What should we take away from this study? Infant feeding practices, particularly the age when solids are started, can impact picky eating behavior later in childhood. This study suggests that waiting until 6 months may be a good start, and that further studies could be useful. Introducing solids at 6 months is in line with the recommendations of the Academy of Nutrition and Dietetics (AND) and the American Academy of Pediatrics (AAP). This is part of the reasoning behind why we suggest waiting until 6 months to introduce Neocate Nutra, the only hypoallergenic solid food designed specifically for infants and children with allergies.

However, for infants at risk of peanut allergy, guidelines have shifted in recent years. Experts now suggest that it’s best to NOT wait for those infants to add appropriate peanut foods to the diet. The latest guidance from the American Academy of Pediatrics (AAP)? For at-risk infants, introduce appropriate peanut foods as early as 4 months of age. You can read more from the AAP.

As always, you should check with your little one’s healthcare team. They can advise at what age to start solid foods. They can also advise whether there are certain foods you should start first. Finally, they can tell you if your infant is at risk for peanut allergy. If he is, they can provide specific guidance on when to start peanut foods.

Would you change the age that you introduce solids based on what we’ve shared?

About the author: Rob McCandlish is a registered dietitian nutritionist (RDN) who joined the Nutricia team in 2010. Rob has years of experience at Nutricia following food allergy research, working with Neocate products, talking with Neocate families and learning about the science behind Neocate and food allergies. He has two nephews who both used Neocate for their cow milk allergies!