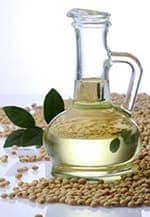 Loads of parents and caregivers, and even some healthcare professionals, contact us asking about the various ingredients in our Neocate products. Here are some common questions we receive:

That last question is one of my favorites, because our answer is so unique. You may be aware that a lot of infants with a cow milk allergy also are allergic to soy. This is sometimes termed milk soy protein intolerance (MSPI). For a while, U.S. Neocate families have requested if we could remove the soy oil from Neocate Infant. They told us that, while the medical community told them highly refined soy oil was okay, they were still wary.

On top of requests from parents, some U.S. healthcare professionals also asked us if it would be possible to remove soy oil. Here’s a quick history behind removing soy oil from Neocate Infant. I’ll also try to answer some questions from a medical perspective about soy oil for those with a soy allergy.

Why did Neocate use soy oil in the past?

For about 20 years, Neocate Infant products in the United States contained soy oil. The oil was very highly refined.  The refining process is designed to remove soy protein, which is the part of food that the body responds to in a typical allergic reaction. The soy oil was essential because it provides certain fats that human infants need to get from their diet – fats which are also found in breast milk. If a baby can’t breastfeed and drinks formula instead, the formula is required by law to contain these essential fats. For many years, soy oil was really the only good source of essential fat that was also permitted for infant formulas. In fact, every infant formula in the United States uses soy oil to provide essential fats.

What changed, Why Neocate Infant Dropped the Soy Oil?

I mentioned that in the U.S. Neocate Infant used soy oil, but other Neocate products for older children did not. That’s because those products contained (and still do contain) canola oil as a source of essential fat instead of soy oil. Canola oil is an excellent source of essential fat, and can be used in foods for children and older people in the US, but had not been used for infant formulas. You know what’s really weird? Neocate Infant products in other countries used canola oil instead of soy oil for years!

At Nutricia, we thought it would be great if canola oil were suitable for use in Neocate Infant too, but there has to be a lot of evidence for the ingredients that can be used in infant formulas, and the evidence has to be given to the Federal Drug Administration (FDA). Basically, nobody had ever shown the FDA the evidence available for the use of canola oil in an infant formula as a source of essential fat. We decided that we wanted to do what we could to replace the soy oil with canola oil in Neocate Infant in the U.S., because it was important to our customers. This involved working with experts and compiling loads of research and information to provide the FDA to support the use of canola oil.

Ultimately, we were able to provide the FDA with the available research and with answers to all of their questions. Based on the long history of use in other countries and the fact that canola oil is a great source of essential fats, we were able to remove the soy oil in Neocate Infant DHA/ARA! In 2013, we finally launched an improved version of Neocate Infant DHA/ARA. Among other nutritional improvements, soy oil was not in the formula. The formula contained canola oil instead, and had higher levels of essential fats. And our newest and most advanced hypoallergenic infant formula, Neocate Syneo Infant, also does not use soy oil.

What does the medical community say?

Despite this, many U.S. healthcare professionals told us that it is confusing for families who find it guidance to avoid products with “soy” on the label, easy to follow. They informed us that many families are inherently suspicious of infant formulas that contain soy oil if their infant has a soy allergy. It can be very difficult for healthcare teams to reassure parents that the soy oil used in infant formulas is “safe” for an infant with a soy protein allergy, especially if the family has been through many allergy symptoms and unsuccessful formula switches. Families want the greatest assurance possible that a formula is “safe.”

Many U.S. healthcare professionals have thanked us for removing soy oil from Neocate infant products, which now means that all Neocate products in the US are made without soy oil. They knew that the refined soy oil was a good option, but felt it would be much easier to provide a parent with an infant formula that didn’t contain any ingredients derived from soy, regardless of the inherent safety of the ingredient. The fact that the improved U.S. Neocate infant formulas now contain higher levels of essential fats than the previous versions was an added nutritional bonus. To this day, Neocate offers the only infant formulas available in the U.S. that do not contain soy oil. We feel it was worth the time and effort to remove soy oil from Neocate infant formulas, and we’re glad to say that there is no soy oil in the entire Neocate product line!

Do you find it reassuring that Neocate products do not contain soy oil?

Published: 01/17/2016
Tags
Food Labels Neocate Syneo Infant Soy
Comments
Savannah
I am so glad nutricia made a formula with no soy oil! Yours is the only one that doesn't make my baby sick. Thank you so much.
04/05/2022
Carolyn Ricciardi
Hi Morgan, Beginning in 2013, Neocate Infant DHA/ARA was the first infant formula in the United States to use refined canola oil as a source of essential fatty acids. Canola oil replaced soy oil, which other US infant formulas except Neocate Syneo still use. Canola oil had already been in standard use in infant formulas in Europe for decades: the extensive evidence of its safe use in infant formulas was reviewed by the FDA (as part of the standard process for any new infant formula ingredient). The canola oil used in Neocate infant formulas is paired with other refined vegetable oils to provide balanced amounts of fatty acids within regulated levels for infant formulas, including the essential fatty acids Linoleic Acid (omega-6) and alpha-linolenic Acid (omega-3), as well as non-essential fatty acids like DHA (omega-3) and ARA (omega-6).
03/01/2022
Morgan
Why would you include canola oil? That is highly processed , falsely marketed as safe, and detrimental to brain health. Very confused that you would say it’s safe and “healthy”.
02/01/2022
Load More
Write a Comment