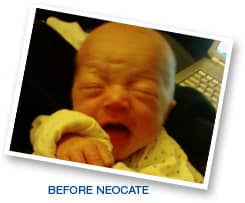 Born at just 34 weeks, Parker was a handsome baby. “The nurses would often tell me how beautiful Parker was as they were making their rounds through the NICU,” says his mother Cat.

But Parker, already a small baby because of his premature birth, started to lose weight soon after his arrival — losing over a pound off of his initial 5 lb. 11oz. birth weight. When his doctors tried new dietary measures to boost his weight, Parker started having gastrointestinal problems, with infrequent bowel movements and severe discomfort. 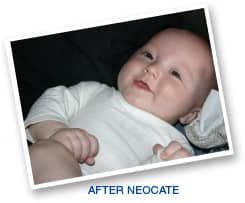 When he was 8 weeks old, doctors suspected Parker was suffering from food allergies. After trying almost every other type of formula, including Nutramigen AA, Alimentum and Elecare, Cat did some research and decided to ask her doctor about Neocate.

He agreed it was a good option and they made the switch when Parker was 14 weeks old. “Instantly, Parker quit fussing and within a few weeks I could see a complete change,” says Cat.

At 7 months old Parker was diagnosed with Eosinophilic Gastroenteritis and Colitis, but his mom still doesn’t have all the answers concerning his condition. He still has severe anaphylactic reactions to a wide variety of foods. “Parker cannot digest any solid proteins, including those found in carrots, avocados, sweet potatoes, apples, wheat, grains and gluten,” says Cat. “And those are just the ones he’s tried!”

However, with Neocate to supplement his diet, Parker began gaining weight. He went from the 2nd weight percentile for his age to the 33rd in just two months. Now, at 9 months Parker is in the 67th percentile. 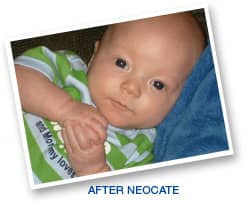 While Parker has a lot of challenges left to face, he has made some big steps in managing his condition. Best of all, he is no longer in such great discomfort because of his dietary problems.

“He still has some catching up to do developmentally,” says Cat. “But he is the happiest kid on the block thanks to Neocate!”