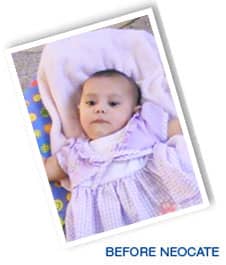 Karisse was just a few weeks old when she began suffering from severe acid reflux, diarrhea, skin rash and colic. She was unable to sleep for more than an hour at a time, cried constantly and vomited often.

Baby Karisse was in trememdous pain. “It was extremely hard and we couldn’t sleep, eat or take her anywhere,” says Teresa, Karisse’s mother. “We knew something was very wrong.”

After countless visits to the pediatrician Karisse was switched to a soy-based formula, but her ailments continued.

When Karisse didn’t improve on the soy-based formula her pediatrician suggested she see an allergist who administered a skin test. The results revealed that she was allergic to milk and soy. The doctor suggested a formula change, this time to a hydrolysate formula composed of partially broken down proteins.

Finally, after the hydrolysate formula failed to alleviate her symtpoms, Karisse’s gastroenterologist and allergists agreed she should try Neocate.

“Once they gave us Neocate samples, Karisse’s symptoms improved that same week,” says Teresa. “With each week she was crying less and vomiting less and the rash left completely.” 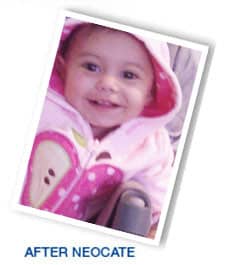 Within weeks, Karisse no longer experienced pain and by the time she was nine months old, she was a happy, healthy baby.

“Once we were given Neocate to feed Karisse, everything went away in months,” says Teresa. “Now I am able to enjoy my baby and go outside!”