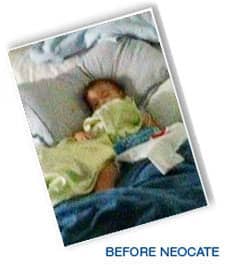 When Carson’s mom brought him home from the hospital, she knew something wasn’t right.  He was fussy, cried constantly and had trouble feeding.  At one month old, Carson’s mom Jennifer decided to supplement with formula.  However, Carson’s ailments continued.

“I tried everything I could think of, But nothing ever changed,” says Jennifer, Carson’s Mother.  “I had to hold him at night to keep his head upright so he didn’t choke or gag,”

Carson was suffering from eosinophilic esophagitis, gastroesophageal reflux disease, milk allergies and soy intolerance.  Weight loss was a constant struggle and he was unable to sleep.

Pediatricians perscribed Zantac and Reglan, but neither helped.  The family tried mixing rice cereal in his formula, but there was no improvement.  “We struggled to make it work,” says Jennifer.

“Everyone was sleep deprived and exhausted from caring for Carson.”

After months of battling pain and poor health, a family member recommended that Carson try Neocate.  Right away, our four month old began improving dramatically.  He no longer spit up or vomited, his rash disappeared and he was able to sleep.

“It was immediately clear that Carson was not able to tolerate anything besides Neocate – the formula was like magic in a can,” says Jennifer.  “He is now happy to sit in his swing or bouncy seat and play without crying out in pain!” 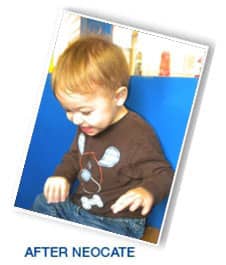 With Neocate, Carson will have the chance to grow to be a healthy child, free of pain.

“Neocate has been a life saver,” says Jennifer.  “Without this formula, Carson would still be screaming.  I am so thankful for this product,”