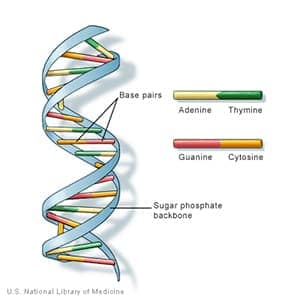 The basic explanation is that nucleotides are the building blocks of DNA (and its partner, RNA). DNA is in our cells, and it contains our genes, or the codes that make of us unique. The same way that protein is made of chains of amino acids, DNA and RNA are both made from long chains of nucleotides. (Nucleotides do not contain protein, nor are they the same as amino acids.) You can find a better, more detailed explanation of DNA here.

Why add nucleotides to formula?

Nucleotides are found in human milk, along with a lot of other helpful components. Scientists realized that nucleotides might provide some benefits to breast-fed infants, including to the immune system. Nucleotides were first added to cow milk-based formulas as early as the 1960s, and have been used in formulas in the US since the 1980’s.

Many infants who need an elemental formula may have experienced growth delays while trying to find the right formula. We at Nutricia want to do everything we can to offer the best possible formula to infants who need an amino acid-based diet. Because of the long history of nucleotides being safely added to formulas, along with the potential benefits, we decided to help many of the little ones that need Neocate Infant DHA/ARA by adding nucleotides.

Hopefully this clears up any confusion over nucleotides! What other questions do you have?