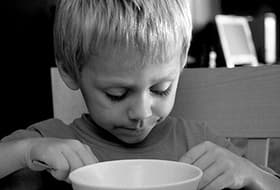 There are several ways to test for food allergies: blood tests, challenge tests, skin prick tests (or scratch tests), skin injection tests (or intradermal skin tests), and skin patch testing (or atopy patch tests). There are advantages and disadvantages of food allergy tests, so depending on the circumstances, the doctor will choose one or more types of tests to assess your little one’s allergies.

With patch testing, an allergen is placed on a patch, which is applied to your skin for approximately 48 hours. In most cases, 20-30 different substances are tested at a time. When being used to test for food reactions, tiny cups containing small amounts of a pure food are taped to the patient’s back. The specific foods used in the test are selected based on the patient’s diet, previous allergic reactions, and/or previous skin prick test results. After the 48 hour period, you return to the doctor, who removes the patches and assesses skin irritation (redness and swelling), which may indicate an allergy to the substance applied at that site.

Patch testing can be especially useful in diagnosing delayed allergic reactions, non-IgE-mediated food allergies, eosinophilic esophagitis, food allergy-related gastrointestinal symptoms, and food allergy-related atopic dermatitis. With these types of food allergies, offending foods are often difficult to pinpoint and are often not detected by other types of allergy testing. Therefore, patch testing can be quite useful in identifying which foods to avoid for these patients.

Although useful, there are some limitations to patch testing because the reagents (food samples) used in the test are not standardized.   Fresh foods are prepared into a smooth consistency to be used with the patch test.  However, the preparation of the fresh food is not standardized, so there is some room for variability in the testing results from one doctor to another.

Side effects associated with patch testing are mild and may include, itching and swelling at testing site, which generally goes away within one hour of removing the patches. The most commonly-reported reaction from patch testing is minor skin irritation from the tape used to attach the patch to the skin. This generally resolves on its own within 24 hours of removal.  Occasionally, patients have a strong positive patch test reaction resulting in more severe irritation, which may take around 4-7 days to resolve.

Has your little one had patch testing? Was it helpful? Do you have any advice for other parents whose children are scheduled for a patch test?

Published: 12/11/2012
Tags
Allergy Safety Diagnosis Allergy Testing
Comments
Eli Richardson
It really helped when you talked about food allergies and their testing options. Recently, my sister mentioned she suspects her daughter has a peanut butter allergy. My sister's not sure about the allergy since her daughter doesn't show a lot of symptoms, so I think your article could interest her.
20/07/2021
Load More
Write a Comment