Epinephrine Safety: How to Keep a Child Safe at School

Share
Epinephrine Safety: How to Keep a Child Safe at School
Print

Epinephrine auto-injectors, for any child with allergies, can be a huge life saver. However, sending your little one to school with their epinephrine can be rather stressful for a parent. There are a thousand questions that might go through your mind, “Will they be safe even with the epinephrine?” or “Will someone know how to use the auto-injector?”

For those of you who don’t know, anaphylaxis or anaphylactic shock can be a life-threatening allergic reaction to specific triggers, such as food proteins and medication. This results in hives or swelling of the throat or tongue, which can lead to constricted airways and/or a dramatic drop in blood pressure.

Epinerphine is imperative when anaphylactic shock occurs and can save a person’s life. An epinephrine auto-injector contains a pre-measured dose of epinephrine. It’s injected into someone’s body during a severe allergic reaction to avoid or treat the onset and symptoms of anaphylactic shock. This provides a window of time to seek further medical attention. 1

If you are a parent of a child who is at risk for anaphylactic shock, you probably carry his or her epinephrine auto-injector with you at all times, in case they are exposed to an allergen to which they are allergic. This is excellent for when you are with your child. However, your child could be exposed to many more allergens at school when you and your auto-injector aren’t there!

In fact, one study of children and adolescents found that 10 out of 13 fatal or near fatal anaphylactic reactions occurred outside the home. All the fatalities did not have epinephrine and those who survived received an epinephrine shot before or within 5 minutes of developing severe symptoms.2

So, what does this mean? Epinephrine can save lives! You need to ensure that the other adults who spend time with your child are trained and able to assist in any situation if you’re not around.

Don’t worry, this isn’t as difficult as it sounds! I suggest sitting down with your child’s teacher in the beginning of the school year to set up a 504 plan. This will ensure he or she receives proper care and attention when you aren’t there and that all adults that are around your child have the proper training to use an epinephrine auto-injector if an emergency situation arises. 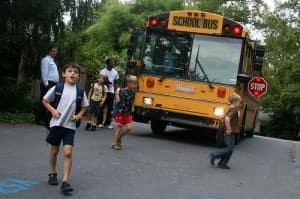 Also, there is good news for all you Massachusetts residents! Thanks to your persistent neighbors, starting March 2010, all newly hired school bus drivers in the state of Massachusetts have been required to have epinephrine training. Unfortunately, the law doesn’t mandate the existing school bus drivers to be trained; however, it’s a step in the right direction. Hopefully the other 49 states will follow suit. Good work Massachusetts!

How have you been able to ensure that your child is safe and can receive the proper care if they go into anaphylactic shock? Did it involve a 504 plan or epinephrine auto-injector training?

Social distancing is a new concept for all of us – and as hard as it is for adults to adopt, getting children to understand and cooperate with our new normal is super challenging. Here are some tips to help…