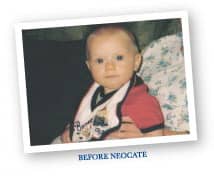 From the day he was born, Trevor constantly spit up during and after feedings. With each day, his condition got worse. “As a newborn, Trevor was between the 25th and 50th percentile for growth and by six months he had fallen between the 10th and 25th percentile,” says his mother Jennifer. By seven and a half months, Trevor’s condition had become so bad that he was vomiting blood. His health problems also began to affect the entire family. Jennifer says she was always on edge and became easily irritated with her other two children because she was exhausted by Trevor’s constant illness.

For more than seven months, Trevor’s condition caused the family lots of confusion. His doctor prescribed Zantac for possible acid reflux and suggested an immediate switch to solid foods to prevent spit up, but nothing worked. After several months, Trevor’s condition was finally properly diagnosed. He was admitted to the hospital for vomiting blood. The doctor performed an endoscopy that revealed irritations to Trevor’s stomach, intestine and colon. These irritations were caused by a milk protein allergy. During that hospital visit, Trevor barely weighed 14 pounds, well below the zero percentile on the growth and weight charts. The doctors immediately put him on Neocate to nutritionally manage his milk protein allergy. Jennifer eliminated all milk proteins from her diet and tried using Neocate as a supplement to her breast milk. However, it was not until she weaned Trevor and relied on Neocate and some foods that he began to gain weight. One month after being on Neocate, Trevor was back up between the 10th and 25th percentile on the growth and weight chart and has become a much happier baby. 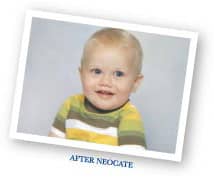 After Trevor’s milk allergy was diagnosed and once Neocate was introduced into his diet, his spitting up stopped and he quickly grew to a healthy weight, which eased his parent’s mind.

“My son is such a happy, funny, inquisitive, cuddly baby now,” says his mom.