The first eight months of Sean’s life were grueling. He experienced the discomfort and pain of vomiting up to three times a day, unable to tolerate his formula. Six months of very little weight gain left Sean feeling weak, while his gastroesophageal reflux condition fueled his asthma symptoms.

At nine months old Sean was diagnosed with failure to thrive; a description given to children whose current weight or rate of weight gain is significantly below that of other children of similar age and sex.

“We didn’t understand why he was vomiting so often and his lack of weight gain,” said Rebecca Sparks, Sean’s mother. “It was heartbreaking on us as his parents to see him go through that all, we felt helpless.”

To combat Sean’s persistent vomiting, his parents tried Zantac and Prevacid, which seemed to soothe his symptoms for some time, but they ultimately returned.

Since his symptoms kept reoccurring, Sean’s pediatrician referred his parents to a gastroenterologist, who tested for allergies, cystic fibrosis and eosinophilic esophagitis. Sean tested negative, increasing his parents concerns. With little options left, Sean’s doctors recommended a surgery, nissen fundoplication, which treats gastroesophageal reflux by stitching the upper part of the stomach around the lower end of the esophagus, reinforcing the closing function.

In an attempt to exhaust all other options, especially surgery, Rebecca turned to Neocate Junior. After a month and a half, Sean only vomited a total of three times compared to three times a day prior to Neocate.

“I definitely wish we had switched to Neocate sooner,” says Rebecca. “Sean is gaining weight and drinking more formula. He was averaging 20 ounces per day and now he chows down 30!” 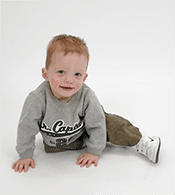 Neocate has improved Sean’s life and offered him an alternative to surgery and for that his parents are grateful.

“Sean doesn’t have to experience the pain of vomiting so often and can tolerate all his formula,” says Rebecca. “Sean has always tried to be a happy camper despite his symptoms, but with Neocate, he can be happy and healthy.”