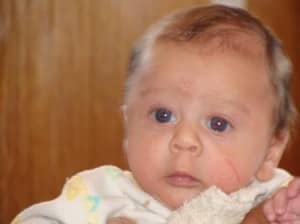 Born December 6, 2008 Roland is an 18 month old toddler who is now perfectly happy and healthy (although fairly small for his age). To be around him now, you would never know the rough start he had in life or the struggles that he still has with certain foods. Due to a traumatic delivery, Roland spent some time at birth in the hospital. He wasn’t able to nurse, and was tube-fed pumped breastmilk. Within just a few days, he began showing signs of dairy protein intolerance, including excess fussiness and gassiness just after eating, arching, vomiting, mucus in his stools and diarrhea. His mom eliminated dairy from her diet and that seemed to improve his condition some and he started gaining a little weight. After a couple weeks, Roland was weaned from the tube and sent home. Unfortunately, once at home, his symptoms continued to get worse. He had difficulty gaining weight, vomited after most bottles of expressed breastmilk, had constant mucus in his stools, frequent diarrhea and it was often extremely acidic. He had frequent weight checks with his pediatrician, and was diagnosed with reflux at around 4 or 5 weeks and started on Zantac, which did nothing to improve his symptoms. In the mean time, his mother started researching about milk protein intolerances and discovered that many babies with issues with milk are also soy intolerant so she eliminated all soy from her diet as well.

Unfortunately, the elimination of soy did little for Roland and his overall health continued to decline. He began projectile vomiting after every bottle of pumped breastmilk and the acidic diarrhea became constant and multiple times each day. In desperation, his mother attempted a total elimination diet, eating only a handful of different foods and eliminating all possible allergenic foods. Nothing seemed to work for poor Roland.

Not All Hypoallergenic Formulas are the Same: 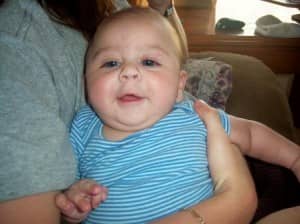 His mother’s supply of breastmilk began to dwindle, and it became necessary to supplement with formula. His parents first tried a hypoallergenic formula. Roland was just a little over 3 months at that point and weighed less than 8 pounds. After less than a week supplementing with Nutramigen, Roland took a turn for the worse. He began completely refusing to eat other than in his sleep, vomiting everything, losing weight, having horrible, acidic diarrhea up to 10 times per day and had blood in his stools. His mother again researched and discovered that the hypoallergenic formulas do contain dairy proteins even though they are very broken down and learned about elemental formula through Nutricia’s website and through moms with a group called the Reflux Rebels. Roland’s parents took him once again to the pediatrician and during that visit, it was decided to move him completely to an elemental diet. Roland began a Neocate only diet at a little over 3 months along with a PPI to heal the damage from the reflux and vomiting. Within 2 weeks of the Neocate, most of Roland’s lower GI issues resolved. His stools became fairly normal, gassiness and painful stomach cramping began to clear, and chronic diaper rash began to clear. And, he finally began gaining weight. He remained small, but at least began following the growth curve. 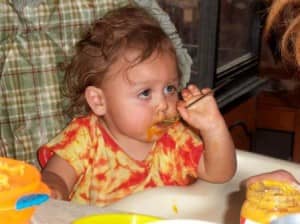 The elemental formula likely saved his life, as it became clear later that Roland probably suffers from a condition known as FPIES (Food Protein-Induced Entercolitis Syndrome). Usually this syndrome doesn’t really become clear until solids introduction, but unfortunately Roland’s condition was severe enough that he reacted to the proteins in his mother’s milk. Solids introductions for Roland were difficult and he reacted to several other foods including rice and corn. Eventually he was able to handle very broken down dairy proteins and could tolerate first the hypoallergenic formula and eventually a toddler formula that is not quite as broken down. His issues with soy are less severe as well. Fortunately for Roland, FPIES reactions are typically outgrown around age 3, but until he is able to tolerate the whole proteins in dairy, soy, rice, and corn, his parents need to monitor his diet closely to prevent horrible flu-like reactions. After about 6 weeks on the elemental formula and PPI, Roland went from an exceptionally uncomfortable, clingy, miserable infant who never smiled or slept to a completely independent, fun-loving, easy to care for baby. It was literally a night/day transition. His parents were also able to take him off of the reflux medication fairly early as his issues with reflux and vomiting were due to the protein intolerance. Unfortunately for Roland, living the first 4 months of his little life in chronic pain created an oral aversion that has continued well into his second year of his life. Eating is generally a struggle for him and could be for years.