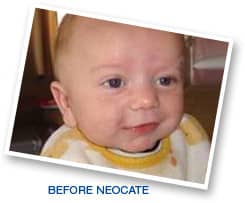 Riley was only a few days old when he started experiencing severe diarrhea and spitting up. His parents Michele and John switched him almost immediately from Good Start to soy formula since they had experienced similar symptoms with their two older daughters who had done well on the soy.

Unfortunately Riley’s symptoms persisted and he developed a rash on his face. Doctors diagnosed him with reflux and “normal” infant facial rash.

“My husband and I were beside ourselves wondering what the problem was,” says Michele, Riley’s mom. “I knew something wasn’t right and was determined to put my finger on it.”

Over the course of two and a half months, Michele went back and forth with the pediatrician, making numerous visits, emails, and phone calls trying to figure out what was wrong with Riley. They introduced Zantac to try and control Riley’s reflux and tried thickening his formula with rice cereal – which just made things worse. Riley also switched formulas multiple times, from soy to Nutramigen and then Alimentum, both hydrolysate formulas.

“Nothing helped,” says Michele. “He spit up almost everything he ate and everything else came out the other end!”

Finally, when Riley was three months old, both blood and mucous were found in a stool sample, indicating an allergy. A pediatric allergist and pediatric gastroenterologist both confirmed the diagnosis of milk and soy allergies, allergy-related eosinophilic esophagitis and allergy-related gastroesophageal reflux.

Riley’s pediatrician recommended Neocate Infant, a hypoallergenic, amino acid-based formula. Because Neocate is made up of individual amino acids (the building blocks of protein), it was easier for Riley to digest than the hydrolysate formulas he originally tried which contain protein chains that have only been partially broken down.

Within 36 hours of starting on Neocate, Riley’s diarrhea stopped, his reflux decreased significantly and his facial rash cleared up. “Neocate was and is LITERALLY a lifesaver for our son,” says Michele. 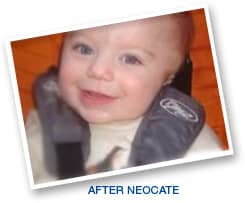 It took three long months and lots of trial and error to diagnose and treat Riley. Since starting on Neocate he is finally getting all the nutrients he needs to grow and thrive.

“I don’t throw the word around much…but every time I tell people about Neocate the word “MIRACLE” seems to follow!” says Michele.