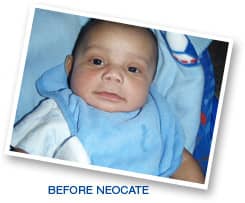 From the day baby Ramsey was born, he was fussy, gassy, and rarely slept. Weighing eight pounds and thirteen ounces at birth, the doctors thought that Ramsey was eating too much during feeding periods and that was causing him to throw up. When Ramsey began to break out in rashes, it was blamed on the cold February weather. And when he had bloody stools and ended up in the emergency room, the doctors said the Similac formula he was on was too strong.

“It was a very trying time for my marriage. My husband and I had to take turns sleeping to be able to care for Ramsey. Our other children were suffering because we were giving Ramsey all our time,” says Percida, Ramsey’s mother.

Over the course of three months, Ramsey visited the doctor multiple times, tried gas relief medicines such as Mylicon, and was put on four different formulas including Similar Soy, Good Start, Enfamil Soy and Nutramigen – but nothing worked.

Frustrated and scared, Percida finally decided to speak with the head doctor to try and find out what was wrong with her son. The doctor diagnosed Ramsey with milk protein allergy and gastroesophageal reflux disease (GERD), and immediately switched him to Neocate Infant — a hypoallergenic formula made up of individual amino acids (the building blocks of protein) that Ramsey could digest instead of the full or partial protein chains in the other formulas that caused him to have an allergic reaction.

The Neocate worked immediately. “Within 24 hours of trying Neocate, Ramsey was a totally different child. No fussiness, no gas, and he slept through the night. It was wonderful,” says Percida. 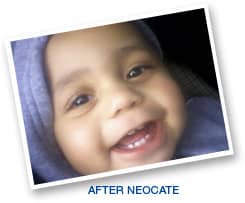 It took 3 months of suffering before Ramsey was finally diagnosed with milk protein allergy and GERD and received the treatment he needed.

“This has been the best thing for our son,” says Percida. “I thought we would have to live with a very sick child but Neocate has been a miracle in a can.”