My first and only child, Teddy, turns 7 next week, and two months after that we mark his 7 year “tubieversary.” He was born full term but aspirated meconium during delivery and was in the NICU for two months for respiratory distress and failure to thrive. It was there that he started his tube feeding journey, first with a nasogastric tube and then with a g-tube shortly before coming home. Those first days, months, years, were hard. So, so hard. He vomited with every feed, around the clock. The parting words of one of the NICU doctors rang in my ears: Don’t let him aspirate, he’ll die. Teddy was not aspirating, but I was terrified. I was drowning. 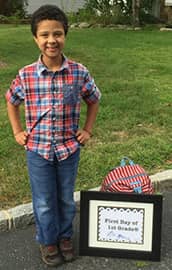 I was desperate to make the vomiting stop, for both of our sakes. We tried all sorts of different formulas, different methods of feeding, different rates, and volumes. Nothing really worked, and I was largely on my own to figure it out. Teddy’s gastroenterologist would use words that I’d never heard, like “bolus feeding.” I was too embarrassed to admit I didn’t know what she was talking about, and too sleep-deprived to realize that being embarrassed was silly. The online parents’ group that eventually turned into the Feeding Tube Awareness Foundation was my main source of knowledge and information, the voices of wisdom and experience filled in all the gaps that the doctors and medical staff couldn’t. Until you have a child at home with a feeding tube, it’s nearly impossible to know the day to day realities and how to navigate them (mostly) successfully.

The vomiting got a little better when Teddy was 9 months old and his new GI doctor put him on an amino acid-based formula, but it didn’t get truly better for another 12 months, and has continued periodically to this day.  Teddy was diagnosed with multiple food allergies when he was a year old, and at 18 months he was diagnosed with eosinophilic esophagitis (EoE). He remains on an amino acid formula that he chooses to drink at school and be fed by tube at home. He has very few safe foods, though we are always working to find new foods that will be safe for him. The social and emotional impact of having such a restricted diet is hard for him, but we read a lot of books about kids with food allergies and talk about how to manage when he feels sad or mad about it. School events that involve food are particularly hard on him.

Life with a g-tube does sometimes require troubleshooting and work arounds, of course. Swimming happens in well chlorinated pools or the ocean, not small lakes or ponds. One piece pajamas all have holes cut into the sides to thread the tube through for night feeding. At the first sign of feeding intolerance, I’m right there with a 60cc syringe to vent out any gas. It is nerve-wracking to know that in an emergency I can’t just grab some food and keep him alive, but I plan carefully to always have some emergency backups of formula and supplies on hand.

I have tried to instill in Teddy that his tube is nothing to hide or be ashamed of, it’s just another part of him and it is what helps him grow and be healthy. Most importantly to him, it’s how he has the energy to swim, dance, do karate, jump over puddles, and build Lego sets. When I first heard that he was getting a g-tube, nonchalantly mentioned by yet another NICU doctor, I was devastated. I didn’t know that children could even get feeding tubes before Teddy was born. I didn’t fight the decision to place a feeding tube; the doctors were clear that if I wanted him discharged, he needed a g-tube. I revisited that decision over and over, unsure if it really was the right choice. Once he was diagnosed with EoE and it became clear that formula would be a huge part of his diet for the foreseeable future, I made peace with the decision. Once I realized how easy hydration during illness and giving medication is with a g-tube, I very quickly went from acceptance to love.

The support and knowledge of the thousands of experienced parents that participate on the Feeding Tube Awareness Foundation’s Facebook page is invaluable.  The willingness to share hard-earned knowledge with other parents, in a supportive and kind environment is a life-saver for me and for so many others. Life with a medically complex child is not easy, but it is so much easier with the right support. I’m so proud of my “tubie”.

Today’s blog post comes from Stephanie McDowell. Stephanie is the Director of Resources of Feeding Tube Awareness Foundation, a 501(c)(3) non-profit organization (www.feedingtubeawareness.org). The organization’s facebook page has more than 45,000 followers and acts as a Q&A forum and place for information sharing. (https://www.facebook.com/FeedingTubeAwareness).