This is Norman. He is three years old and has the spirit of a child who sees the world as his playground. He also sees much of the world through a looking glass. When he hears the ice cream truck, he runs to watch children gather with dollars in hand for treats that he may never taste. Norman is a boy with eosinophilic esophagitis, known as EE or EoE for those averse to tongue twisters. 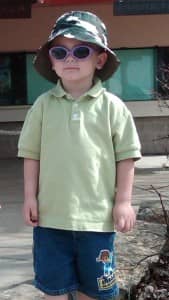 Eosinophilic esophagitis is a condition of the gastrointestinal tract caused by an immune system gone awry. Eosinophils, white blood cells charged with fighting off parasites, mistake food proteins as foreign invaders. They flock to the esophagus to attack “invading” food proteins and remain there long after the food has passed through to Norman’s stomach. The eosinophils cause inflammation and other damage to the esophagus. The inflammatory process interferes with the body’s ability to properly utilize food that is taken in, causing a variety of symptoms that can make eating difficult or even impossible. Some EE patients must exclude just a few foods from their diets. Some, like Norman, react to every food and must rely on elemental formulas as the sole source of nutrition if they are to avoid life-long steroid treatments. Most are somewhere in the middle.

“But he looks so healthy!” That is the universal response to the above explanation for why Norman drinks formula rather than eating with the rest of us. That is true when he is on a diet consisting only of Neocate One Plus, Neocate Nutra and cane sugar. Those who have known Norman since birth know that it is complicated.

As an infant, Norman rarely slept more than 20 to 30 minutes at a stretch. He screamed in pain every time he soiled his diaper which, for many months, was more than a dozen times each day. His skin was burned and blistered despite our attempts to protect it with creams. Skin infections were not uncommon. When he wasn’t taking a cat-nap or screaming in pain, Norman was nursing. He pulled away frequently, arching his back and turning his head at an awkward angle. Seizure-like shaking was another indicator of severe reflux that was unresponsive to prescription medications. Despite the constant feedings and extreme modifications to my diet, Norman failed to thrive. The introduction of solid foods to his diet was disastrous. He delighted in each new food…until the pain of eating overcame the joy. Food trial after failed food trial, we could do nothing to ease his pain.

The day of Norman’s diagnosis was a day of celebration. We stopped giving him food and switched him to an elemental formula. Within a few days, he was sleeping longer and crying less. For the first time in his fifteen months, he began to thrive!

To those who say that Norman looks healthy, I say this: “Yes, he is healthy, but his eosinophils are still poised for attack. He is healthy because he doesn’t eat food.”