When Makenzie was 18 months old, she suffered a serious global brain injury after choking on a cracker. After five and a half weeks in the pediatric intensive care unit and intensive rehabilitation, she was released with a feeding tube in her stomach and a prescription for a hydrolysate formula called Peptamen Jr.

For 11 months Mackenzie would throw up after every feeding. Her mother, Pam, took Makenzie for allergy tests, which revealed that she was allergic to a long list of foods including casein, lactose, gluten and soy. With the Peptamen Jr. not working, Makenzie began trying other types of formula, including COMPLETE Pediatric, Nutren Jr., Vivonex and blended food.

“We tried everything, short of having a chemist make a formula just for Makenzie, with no success!” says Pam.

As a result, Makenzie did not gain any weight and was diagnosed with failure to thrive when she was two years old.

Finally, doctors switched Makenzie to Neocate, a hypoallergenic formula made up of individual amino acids (the building blocks of protein) instead of the full or partial protein chains in the other formulas that Makenzie tried. Almost immediately, she was able to keep the formula down. Within a month, she gained six pounds. 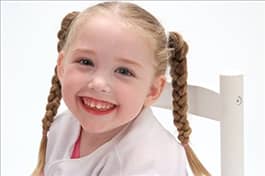 At age four Makenzie began to show signs that she wanted to eat orally. Pam tried feeding her jarred baby food and cheesecake, but the baby food did not contain enough calories to cut back her tube feeding and the cheesecake caused her allergic reactions to flare.

One day, Pam received a flyer about Neocate Nutra — a semi-solid amino acid-based medical food. She researched the nutritional information and requested a sample.

“I received my sample on a Friday and Makenzie LOVED it! I had orders for six cans placed by Monday afternoon!” says Pam.

Pam consulted with her dietitian and discovered that by supplementing Neocate Nutra with a few other foods she was able to meet Makenzie’s full nutritional needs.

Within ten days of starting on Neocate Nutra, Makenzie went from being 100% tube-fed and formula dependent, to about 300 calories per day shy of not needing her tube at all.

If you want to share your before and after photos, we’d love to see them!