Liza and Scott were extremely worried when Luke, their three week-old son, developed a rash on is face and started experiencing severe diarrhea and bloody stool.

“It was terrible seeing Luke so sick and in such pain. We knew he wasn’t gaining enough weight in those first weeks,” says Liza. “We look back on those days and wonder how we got through it.”

When Liza and Scott first found blood in Luke’s stool, they took him to the pediatrician who said he had an anal fissure. When the bleeding didn’t stop, Liza and Scott knew that wasn’t the problem. So the pediatrician referred them to a pediatric gastroenterologist who performed a series of tests on Luke, including a complete blood count (CBC), colonoscopy, kidney scan, and a test for clostridium difficile and e-coli. When the results came back, Luke was diagnosed with a milk allergy. So Liza and Scott tried switching Luke’s formula to specialized formulas. They tried Alimentum, Similac, and EleCare, but none of them helped Luke. Actually, the bleeding was getting worse.

The gastroenterologist then suggested that Luke try Neocate Infant, a hypoallergenic, amino acid-based formula. Unlike other milk-based formulas, Neocate is 100% dairy-free and comprised of proteins broken down to their simplest form (amino acids) which babies like Luke, who are unable to digest whole protein chains found in milk, can tolerate. Neocate started helping immediately. After only two days his diarrhea and bloody stool stopped and his rash went away. 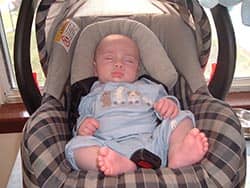 When he was only a few weeks old, Luke suffered from a milk allergy that caused diarrhea, bloody stool and a skin rash that distressed the entire family. After trying several formulas, Luke’s parents finally found Neocate Infant. Using Neocate Infant as part of an elimination diet immediately stopped his allergy-related conditions. According to Liza and Scott, thanks to Neocate – Luke is thriving and is in the 95th percentile for both height and weight. “Neocate saved our little boy!” says Liza.