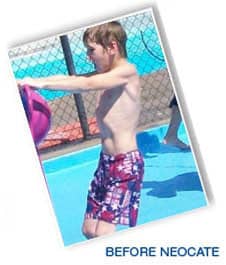 At six years old, Landen had ulcers throughout his esophagus and into his upper stomach.  As his symptoms worsened Landen was unable to swallow solid food.

“His life changed,” says Kara, Landen’s mother.  “He couldn’t participate in normal childhood activities like sleepovers and birthday parties and it was very hard for him to understand why.”

Landen’s family had to watch what they ate in front of him and their grocery budget was focused on maintaining his diet.

Landen saw numerous doctors, including an ear, nose and throat doctor who referred him to a gastroenterologist.

“Two weeks after seeing the specialist, we had a confirmation of his eosinophilic esophagitis,” says Kara.

After Landen was diagnosed, his symptoms continued for two and half months.  “We went back to the doctor and Neocate was the first thing that was recommended to us,” says Kara.  Shortly after taking Neocate, Landen became a healthier boy. 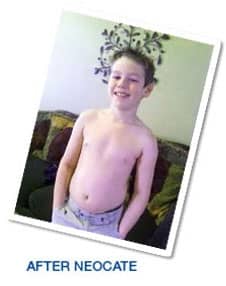 With Neocate, Landen will have the chance to grow to be a healthy, happy boy.

“Before Neocate, Landen was losing weight and wasn’t well nourished,” says Kara.  “After Neocate, Landen’s weight has stabilized and he finally feels full!”