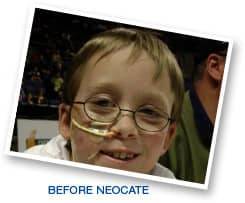 Jake’s younger brother Carson had been diagnosed with Eosinophilic Esophagitis(EoE) when he was two. He had bad reflux and a hiatal hernia, which was surgically repaired. After the surgery, Carson seemed better, but eventually the pain came back and he would refuse to eat. An upper GI found inflammation of his esophagus, and the doctors took biopsies which led to his diagnosis.

“Fast forward two years, and Jake started having all the same issues as Carson with food, pain, and not being able to eat,” says Chanda, Jake’s mother. “I moved quick, got the pediatrician to refer us to Carson’s gastroenterologist, and Jake was scoped within 2 months of the start of symptoms. We had our diagnosis, Eosinophilic Esophagitis.”

When the gastroenterologist referred them back to an allergist for additional testing, Jake tested positive for allergies to more than 40 different foods. Jake didn’t have enough “safe” foods to survive on; almost everything he ate was causing symptoms.

“It was a mess. We tried to find a diet he could eat, but eventually, it was a losing battle,” says Chanda.

Unable to eat food, Jake was put on Neocate Junior, a hypoallergenic formula made up of individual amino acids that is easier for children with allergies to digest. Although he tried drinking the formula, he wasn’t able to drink the 56 ounces per day that he needed in order to meet his nutritional requirements. Instead, he was admitted to the hospital and doctors placed a nasogastric tube (NG) tube into his nose and prescribed Presdnisone, a steroid.

Chanda has started the long process of trialing foods. They have tried more than 20 so far, but only found four safe foods for Jake to eat. He still relies on Neocate Junior for his nutritional needs.

“I don’t have to worry about whether or not he is eating enough, or getting enough nutrients, or if he might have a reaction today,” says Chanda. “Neocate takes that worry away.” 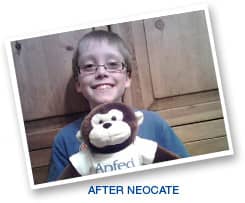 In the two years that Jake has been on Neocate Junior, he has gained over 20 pounds. Now he is a happy 9 year old boy, who is able to enjoy activities with other kids his age — including playing tackle football, with his G-tube!

“It’s been a long and emotional process,” says Chanda. “If it weren’t for his Neocate, he wouldn’t be here.”

To learn more about Jake’s journey check out this video from his family: