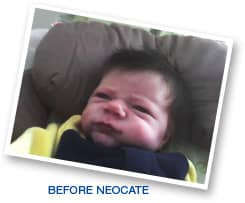 Jacob was only a month old, when he was hospitalized for vomiting and dehydration. An upper GI exam at the hospital revealed that he had gastroesophageal reflux disease (GERD), and he was discharged with a prescription for Zantac.

Despite the new prescription, Jacob continued to cry constantly and had horrible gas. Jacob’s parents barely got any sleep, and with both of them working, they were constantly exhausted and tense. “I hated seeing my son in constant pain — his stomach was always hurting and he was constantly vomiting,” says Michelle, Jacob’s mother.

Michelle thought that Jacob might be allergic to her breast milk, and her pediatrician decided to try him on Nutramigen, a hydrolysate formula in which the protein chains are partially broken down. However, Jacob’s symptoms continued and he started developing blood in his stool.

The doctors switched Jacob to Similac Alimentum, another hydrolysate formula, and prescribed Prevacid for his reflux. But baby Jacob was still miserable.

Frustrated, sad and tired, Michelle searched the internet for anything that could help her son and found the Neocate Web site. Neocate is a hypoallergenic formula made up of individual amino acids (the building blocks of protein) instead of the partial protein chains found in the other formulas that Jacob tried.

“After reading through the Web site and testimonials I decided that the formula was definitely worth a shot,” says Michelle. “What did we have to lose? I figured, things could only get better at this point.”

Michelle consulted with her doctor and they decided to make the switch. Within two weeks of trying Neocate Infant, Michelle started to notice a difference. At five months old Jacob was finally able to sleep through the night and Michelle no longer had to give him gas drops. 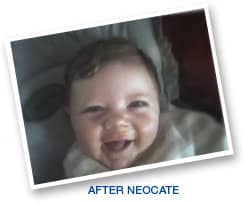 After five long months of trying everything from an elimination diet while breastfeeding to various formulas, Jacob and his family finally found Neocate.

“Neocate has allowed Jacob to be the happy, fun-loving baby I knew he could be,” says Michelle. “I only wish we would have found out about the formula sooner. Every pediatrician and gastroenterologist should be informed about Neocate.”