Isabella spent the first 10 days of her life in the NICU after being born prematurely. When her parents Allison and Tyler finally brought her home, she became extremely colicky, gassy and calorie-deprived. 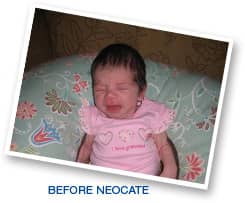 Isabella was losing the strength to breastfeed, so her mom Allison began supplementing with formula. Despite her visits to the doctor three times a week, Isabella still struggled to gain weight and her mom began noticing blood in her diapers.

“Physically, Bella was weak. She was in extreme pain due to the gas and irritation and bleeding in her intestines,” says Allison. 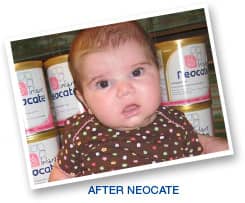 When Isabella was six weeks old, Allison took her to a GI specialist who immediately diagnosed her with a milk and soy protein intolerance and reflux. The doctor switched her to Alimentum, a hydrolysate formula with partially broken down proteins.

After two weeks on the new formula, Isabella continued to show symptoms of her intolerance and had minimal weight gain. The GI specialist decided to switch Isabella to Neocate, a hypoallergenic formula made up of individual amino acids that are easier for babies with allergies or intolerances to digest.

“Within days we saw a difference and over the weeks and months she started gaining weight and turned into the happy and loving Bella that had been hiding all along!” says Allison. 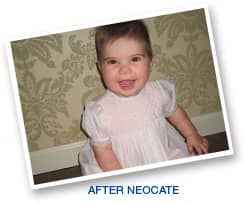 Before Neocate, Isabella was gassy, colicky and failing to gain weight. Now, at nine months old she has caught up to her peers and is in the 95th percentile for weight.

“Once we started Bella on Neocate she became a different baby. Bella is now nine months old and is our healthy, beautiful little girl!” says Allison.