We would like to thank Kendra Tiedemann for guest blogging for us and sharing her family’s allergy story. Stay tuned for her next entry about her other son Norman!

If you were to ask my son’s classmates about him, they would describe a typical five-year-old boy. They would say that Paulie likes cars, trucks, dinosaurs, and making noise. They might also tell you that he skips lunch every day. What they may not tell you is that Paulie is allergic to dozens of foods, or that simply sitting with his friends for lunch in the cafeteria would be a danger to his health. 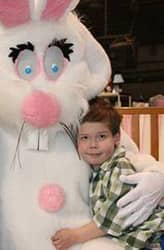 Paulie began showing signs of allergies as an infant. He developed eczema by 10 weeks of age. Traditional therapies were ineffective. By five months, Paulie was wheezing daily. After hours on the phone, looking for an allergy specialist, I knew exactly what the next call would bring. “We don’t do allergy testing until after age two. Call again in 18 months.”

Our lives changed dramatically when Paulie, still just eight months old, was rushed to the hospital after he stopped breathing. The allergist we saw afterward indicated the symptoms were consistent with a severe allergic reaction. Allergy testing came up positive for some foods and animal dander. Removal of allergens from Paulie’s diet and reduction of animal dander in our home decreased symptoms, but there were still unexplained flare-ups.

Two months post-diagnosis, we were visiting family for the holidays where each day started with a hot breakfast. Paulie’s asthma and eczema flared each morning shortly after we entered the kitchen, but only sometimes during lunch and dinner. Finally the pattern was clear. He was reacting to food proteins in the air! We learned not to cook or reheat anything with eggs or pork around Paulie. Peanuts and tree nuts were banned from our home completely.

Paulie continued to sensitize to more foods over time. His allergy list grew from two foods to eight, and then to fourteen. Eventually, he was reacting to every food that he’d ever eaten. Additionally, Paulie was diagnosed with another allergic condition: eosinophilic esophagitis (EE or EoE). So, in addition to immediate and potentially life-threatening asthma and skin reactions, Paulie also has delayed GI reactions. These include esophageal pain, reflux and vomiting, generalized abdominal pain and skin-blistering diarrhea that hits one to three days after ingestion of an allergen.

It has been a year and a half since Paulie sensitized to the last of his safe foods. His sole source of nutrition is Neocate One Plus. We use Neocate Nutra, cane sugar and ice to give Paulie the option of sitting down with a bowl of something while we eat. He has adjusted well to his limited diet. When asked what he can eat, Paulie will rattle off his list as though it is carnival fare. “I can have special juice and special food and ice! Big ice, little ice, snow cone ice and ICE ice! And cotton candy and popsicles and freeze pops and…”

I am incredibly thankful that Paulie handles the restrictions so well, and often look to his example when we encounter food in an unexpected place.