Living with food allergies and eczema has become quite normal for our family. Our son, Morgan, is now almost 14 years old and has lived with food allergies his entire life. He is anaphylactic to peanuts, tree nuts, sesame, fish and shellfish. He is severely allergic to dogs, cats and other furry animals. His eczema is our ongoing battle. He is allergic to grasses, weeds and trees. He currently is receiving allergy shots in the hopes that his seasonal allergies will be minimized, and maybe he will be able to pet a dog in the near future! 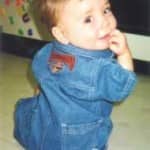 From his first few months, Morgan had severe, weeping eczema across his body. It was everywhere – behind his knees, on his hands and feet, and even behind his earlobes. His skin was constantly infected, and I coated him with lotions and over the counter steroid creams to not much avail.

Morgan’s eczema was helped by using Eucerin® lotion in the paste form, and by sparingly using Elocon® lotion (a steroid) when he was an infant. The Eucerin® is almost the consistency of lard. Wal-Mart sells a generic brand of this that costs about 1/2 the amount of Eucerin®, and we’ve found it to be equally as good. We slathered it on him every night. When he was a baby, we applied it every time we changed his diaper. The Elocon® lotion is a steroid cream, so we tried to use it only when his eczema got very severe.

The eczema moved around his body as he grew older, but it has never entirely disappeared. For a while, he had one finger that regularly sported an eczema spot if he ate any food with food dyes!

The use of heat in the winter time dries out his skin, as does swimming in chlorinated water in the summertime. So, there isn’t a season where he gets a break. If we forget to use the Eucerin® paste, his eczema will crack and fissures will form. He has been put on antibiotics, which ended up curing the fissures. However, we try to not allow the eczema to get this out of control. The Elocon® lotion will sting if put on eczema with fissures. He would cry in pain which hurt me almost as much as him – and made me more aware of staying ahead of his skin problems. Morgan’s eczema gets worse when certain foods are added to his diet. We notice that processed foods with yellow and red dyes made his skin much worse, so we removed these from his diet entirely when he was young. This helped the eczema to disappear, yet it would amazingly reappear for no apparent reason. When he was a baby he was severely allergic to eggs; when this allergy disappeared, we started feeding him foods containing eggs, only to find that his eczema flared up. 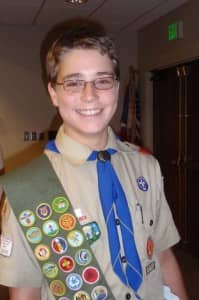 We live in Colorado Springs, which has hot, dry air in the summer. However, combining the heat with sun lotions is a recipe for disaster. We use titanium dioxide sun lotions since they seem to be kinder to his skin. Certain fabrics such as nylon bother his skin, creating eczema-like blotches. Long ago, I began using laundry soap that is free of all dyes and perfumes. None of this cures his eczema, but it helps it to not become worse.

Now that he’s a teenager, he’s responsible for taking care of his skin. As with most teenage boys, hygiene is a difficult daily practice! For a while, the prescription medication Singulair® cured his eczema completely. Now it doesn’t work as well. Since he started allergy shots his eczema seems to be worse, yet he is also in the middle of puberty. Our allergist had told us that some patients experience worsening eczema with allergy shots, yet his environmental and pet allergies are much better. It’s a difficult trade off!

When he has a bad eczema breakout, we have begun wet wrapping his skin with CeraVe® moisturizing cream and Betamethasone steroid cream. (He also takes an antihistamine, such as Xyzal or Zyrtec once a day.) We apply the steroid first, then the moisturizing cream and then hot, wet gauze to wrap his skin sealing in the moisture. Adding socks or ace bandages over the top insures the gauze stays in place. Keeping the wet wraps in place overnight helps the worst eczema spots. Twice a day wet wrap treatments can do wonders for his skin!

We feel like detectives on most days, attempting to find the cause of the eczema. It might be food related, contact related (such as grass or clothing articles) or none of the above. We would love to find the magical cure to make his eczema disappear. In the meantime, we’ll keep searching for what works for today to ease the itch!

Nicole can be reached at: