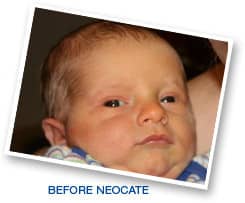 Blake was only four days old, when he began burping up blood after being breastfed by his mother Allison. A few days later, the blood appeared in his stool as well.
“Blake was so unhappy,” says Allison. “He was crying all the time, was in so much pain that he couldn’t sleep at night and had extremely dry skin.”

After noticing the blood in both Blake’s spit and stool, Allison rushed him to the hospital where he was diagnosed with a severe milk protein allergy.
Over the next three months, Blake saw a pediatrician, gastrointestinal specialist and an allergist about his milk allergy. In addition, he was switched from breast milk to Good Start and then to Nutramigen and Alimentum — but none of the formulas seemed to help.

Finally, the GI doctor recommended Blake try Neocate Infant — a hypoallergenic formula made up of individual amino acids (the building blocks of protein) that Blake could digest instead of the full or partial protein chains in the other formulas that caused him to have an allergic reaction. 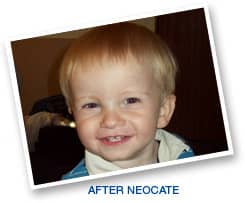 It took three long months before Blake received the treatment he needed for his milk protein allergy. Neocate relieved his pain and allowed him to sleep at night.

“After starting Neocate, Blake was like a new baby,” says Allison. “He was happy again!”