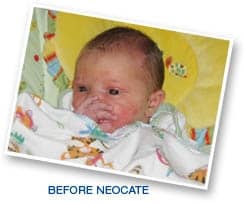 Immediately following his birth, Blaise suffered from a severe skin rash that developed once his mother began feeding him regular formula.

Unable to tolerate the formula, Blaise experienced persistent vomiting and diarrhea, accompanied with sleepless nights.  Blaise’s symptoms caused him to consistently be fussy and lethargic despite his mother’s countless attempts to console him.

“The longer we fed him the formula, the worse his rash, vomiting and diarrhea got,” says Danielle, Blaise’s mother.  No matter what I did to soothe him, it was useless, and as his mother, that was hard to handle.”

Becoming concerned with Blaise’s skin rash, Danielle mentioned the issue to his doctor who dismissed it as baby acne.  As time passed, his related symptoms did not improve.  In search of a solution, Blaise’s mother tried soy and hydrolyzed formulas, which unfortunately made him worse.

As Blaise’s symptoms began to get worse, his mother readdressed the symtpoms with his doctor, who asserted that Blaise did in fact suffer from atopic dermatitis; a chronic skin disorder where the skin becomes extremely itchy and inflamed, causing redness, swelling, cracking and scaling.  He concluded that the dermatits was fueled by milk allergies.  However, the doctor insisted that she continue using the hydrolyzed formula, as it was too early to confirm its effectiveness.  A week passed and Blaise was still in pain, suffering from atopic dermatitis, vomiting and diarrhea.

With a little reserach on Danielle’s part and advice from her mother who works at a hospital, she turned to Neocate with hopes that it would help her baby lead a healthy and happy life.

“I found it amazingly effective almost immediately,” says Danielle.  “It was like I had a new baby.  His dermatitis cleared up, he started sleeping through the nights and his vomiting and diarrhea stopped immediately.” 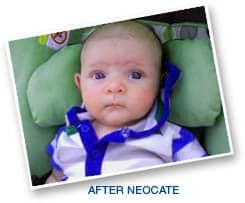 At 10 weeks old, Blaise is responding great to Neocate, it has made him an active and responsive baby.  His parents are thankful for the Neocate product and their commitment to improving the quality of life for babies suffering from milk allergies.

“It was quite the trip to get here, but he’s developing at an amazing rate,” says Danielle.  “Neocate is a great product and has made my son the baby he always should have been.”