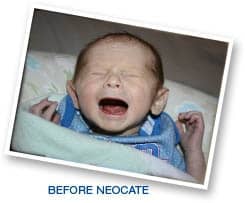 As a newborn boy Benjamin weighed a healthy 6 lbs. 3 oz. but within days of his birth, he began to lose weight and break out in a rash all over his body.  He was terribly unhappy and inconsolable.

While Benjamin struggled to gain weight, he began to vomit every time he ate and often had diarrhea.  At two and half weeks old, Benjamin’s parents took him to the emergency room where he was admitted for one month.  As his symptoms worsened, doctors ran numerous tests, all of which came back inconclusive.  They also tried many different formulas but nothing relieved Benjamin’s symptoms.

“Benjamin was born a healthy child and it was so hard to watch him slowly lose weight and have his symptoms continually become worse,” says Suzanne, Benjamin’s mother. 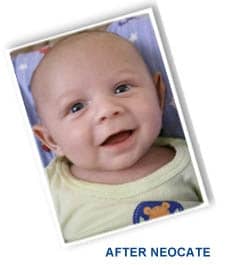 After a few weeks in the hospital, Benjamin was put on 10 days of bowel rest and antibiotics.

Eventually doctors concluded that Benjamin had a severe milk protein allergy in addition to a soy allergy.

Neocate was slowly introduced into Benjamin’s system after his dramatic weight loss and numerous setbacks at the hospital.  Benjamin’s symptoms began to improve just a few days after starting Neocate and he was discharged from the hospital once he began to gain weight.

“After everything Benjamin had been through, I was doubtful that anything could make him better but I noticed a difference in him almost immediately after starting Neocate,” says Suzanne. 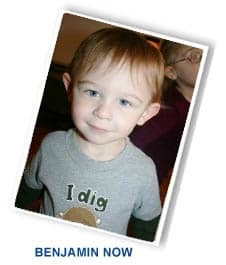 At 15 weeks old, Benjamin weighs 15 pounds on his Neocate diet.  His rash has disappeared and all of his symptoms have dissipated.

“Benjamin is a happy, healthy baby now.  He loves to eat and we owe his success to Neocate!” says Suzanne.