FPIES, or food protein induced enterocolitis syndrome, is a condition that I’ve been hearing about more and more lately. It is not particularly well-known, so I thought we could cover some of the basics in today’s blog.

FPIES is a disease that typically affects infants and young children. While it can mimic food allergies, the difference with FPIES is that it is a non-IgE mediated immune reaction in the gastrointestinal (GI) tract to one or more specific foods. This means that the IgE antibodies associated with other food allergies are not involved in an FPIES reaction.

Cow milk and soy are the most common FPIES triggers, but ANY foods can cause an FPIES reaction (even ones that aren’t common allergens, like rice and oats).

Most FPIES reactions happen when a child is very young – just a few weeks or months old. If often happens when starting the first formulas or solid foods. (Breast milk doesn’t usually cause an FPIES reaction, even if the mother has eaten a trigger food).

Each child is different, but the most common symptoms of FPIES involve the GI tract, most often projectile vomiting. This means that it often looks like a stomach bug. Diarrhea can also occur, but is less common. There is almost always a delay in onset of symptoms – often vomiting occurs 2 hours after eating a trigger food, with diarrhea following 5 hours after eating. Some children experience relatively mild symptoms, while others have such severe vomiting and diarrhea that they can become seriously dehydrated and go into shock.

It can be difficult to diagnose FPIES because blood allergy tests only look for IgE-mediated responses. Usually a diagnosis occurs after repeated reactions. Keeping a food journal may be helpful in identifying triggers if you think your child has FPIES.

Treating FPIES varies depending on the child, their triggers and reactions. For infants with FPIES an elemental formula like Neocate is often used. For some children who have fewer triggers treatment is simply to avoid those foods. Introducing new foods slowly – one at a time and for up to three weeks – is extremely important to identify both safe and trigger foods. If your child has an FPIES reaction, it is important that they remain hydrated to avoid going into shock. 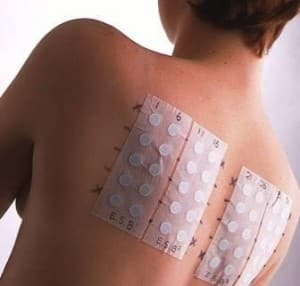 Many children with FPIES outgrow the disease by age three, but this can vary based on how severe their symptoms are and which foods they react to. According to an article from Kids With Food Allergies, one study showed that 100% of children with FPIES reactions to barley had outgrown and were tolerating barley by age three, while only 40% of those with FPIES to rice, and 60% to dairy tolerated it by the same age.

To determine if your child has outgrown FPIES, work with your doctor on a food-by-food basis. Atopy patch testing can help assess if your child is ready for an oral challenge in your doctor’s office or hospital (do not attempt without a doctor’s supervision!).

We hope this helps shed some light on an often confusing disease. If any of you have children with FPIES and can share your experiences, please leave a comment!