Gut Series: The Mouth and Esophagus 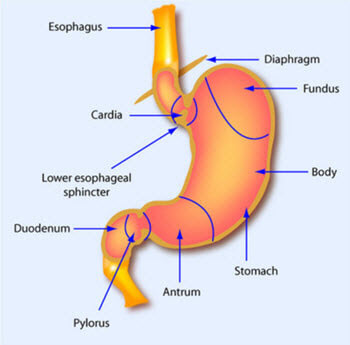 This post is the first of our new “Gut Series”, which will explore the GI tract and teach you about the complexities of the digestive system from the top down. Today, we’ll cover the mouth and esophagus.

Let’s start with the mouth. You may think that the sole purpose of the mouth is to actually consume the food your body will digest the food but actually, the digestive process starts in the mouth. For one, the chewing process starts to break up the food to make it easier to digest and absorb. In addition, amylase, an enzyme found in saliva, starts to break down food starches into more digestible forms. Just past the mouth is the throat, or the pharynx.

The esophagus attaches to the throat and the stomach. At the top of the esophagus is the “Upper Esophageal Sphincter” or UES, a group of muscles that we can consciously control, like during swallowing, burping, vomiting, etc. The UES keeps food from going down the windpipe. At the lower end of the esophagus, near where it attaches to the stomach, is the “Lower Esophageal Sphincter” or LES. Unlike the UES, we cannot consciously control the function of the LES.

The main role that the esophagus plays in digestion is to carry food, liquid and saliva from the mouth to the stomach, where the majority of digestion begins.

Disorders of the Esophagus

The LES prevents the stomach contents and acids from coming up into the esophagus. When the LES does not work properly, stomach acids can travel backwards into the esophagus, a condition we know as reflux. This can lead to symptoms like heartburn, coughing, or hoarseness. When reflux occurs frequently and causes symptoms, this is known as Gastroesophageal Reflux Disease or GERD. Esophagitis refers to inflammation of the esophagus, which can be caused by reflux, infection, or an allergic response, such as the case for the condition Eosinophilic Esophagitis.

Stay tuned for our next article in the Gut Series where we move on to the stomach!

Thank you for your comment.
Your comment will be reviewed in the next few business days.
Sorry there was an error savinig your comment.
Please reload the page and try again.
Condition Education
Importance of fiber in childhood when it comes to food allergies