If you have been reading our blog for the past few years, you may know that I not only have been working for Neocate for over 11 years but I’ve also had firsthand experience with cow milk allergy (CMA) and Neocate.   My daughter was recommended to take Neocate when she was just seven weeks old for what doctors and I believe was a cow milk allergy.  Once we started Neocate her reflux and colicsymptoms resolved within a few weeks and all went according to expectations.  So, when her brother, Ryder, came and didn’t spit up the day he was born as she did I was hopeful!  Unfortunately, his reflux symptoms started soon after he was born but seemed to be controlled with Zantac. 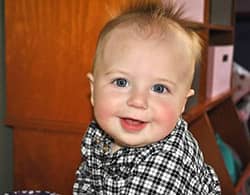 At around five weeks old my poor little guy became feverish.  We were advised to take him to the emergency room which turned into four long, exhausting days in the hospital.  Multiple doctors came to see us trying to determine the cause of the fever.  We had test-after-test-after-test done with no answers and a fever that just wouldn’t resolve.   By process of elimination it was determined that he simply had a virus that he had to fight through.  However, through test results, a GI doctor believed that his virus was possibly causing his liver to malfunction.  The GI doctor told us he needed a formula that was elemental and easy to break down so the liver didn’t have to work as hard.  I couldn’t believe it; my second baby needed Neocate too.  Per the GI doctor we started Neocate immediately.  After four days, his fever finally resolved and liver levels were moving in the right direction so we headed home.

Two days after starting Neocate (with no transition period) I decided to switch him back to standard formula since I believed the virus really was the cause of the liver malfunction.  About two weeks later we had a follow-up visit with the GI doctor who told us that his liver was back to normal – phew!  However, as timing is everything, he happened to have a bowel movement at the doctor’s office.  To my BIG surprise the doctor found blood in the stool.  Back to Neocate we go!

This time I went by the book and slowly transitioned him onto the Neocate.  Again, two days into it and things were not going well.  I had a fussy baby who didn’t sleep and wouldn’t eat.  I knew in my heart that I needed to stick with the Neocate and things would get better as I tell parents like you that every day.  But, at that point my internal voice was screaming and I wanted to switch him back!  I was desperate to get my happy little boy back.

It took every ounce of me and a lot of family/friend support to keep him on the Neocate.  After what seemed to be a year-long week, things started to turn around and after about two weeks I was so thankful for sticking with the Neocate.  He was drinking more than ever, was happy as could be and all the blood in the stool had cleared up!  He is now about to turn one and continues to do so great!  I would have never imagined that I would end up with two happy Neocate babies!